A Nation Once Again 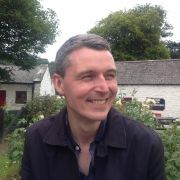 Dr Colin Reid, Senior Lecturer in British and Irish History at the University of Sheffield, discusses his recent Fellowship at Marsh’s Library and the joy of unexpected finds.

I was delighted to take up my Maddock Research Fellowship recently after a lengthy Covid-related delay. My current research project centres on ideas of representative and ‘good’ government between 1798 and 1880, mostly drawing on the rich but underexplored body of pamphlets written throughout the nineteenth century.

Marsh’s Library is renowned for its early modern collections, but also holds a large number of nineteenth-century Irish political material. After several years of working only with digitised pamphlets, I was eager to handle the ‘real thing’ once again.

During my fellowship, I read material by well-known authors and political activists, such as Henry Parnell, and slightly more obscure writers, such as Thomas Townsend. Taken together, the pamphlet material documents how generations of people in Ireland crafted political arguments, and the competing imagined futures that were given expression.

One of the joys of working with physical pamphlets is that single editions are often bound (by the original collector or the institution that houses them) with other tracts to make a larger volume. The reader has requested one pamphlet, but is often brought a volume containing many more; I have often ‘accidentally’ found fascinating material in this way, which I otherwise might have missed. 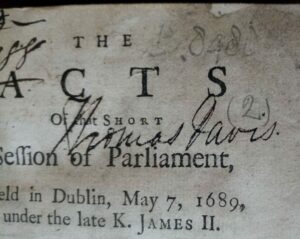 Flicking through the pamphlets in the multiple volumes on my table, I noticed the recurring signature of Thomas Davis, the leading figure of the Young Ireland movement, on the title pages; Davis’s pamphlets had been bound together by a London-based book collector called James Noonan in the early twentieth century, and acquired by Marsh’s Library some time afterwards. For a brief time, then, I entered into Davis’s inner world, reading what he read and following his annotations. As so often, it is the unexpected research finds that are the most memorable.

An Irishwoman on the continent
Listen Back – A Place of Stories