Eloise Davies tells us about her recent research at Marsh’s Library. 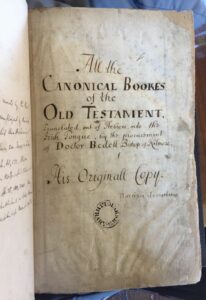 In 1685, the first translation of the Old Testament was printed in Irish. The title page claimed it had been translated ‘by the Care and Diligence’ of the bishop of Kilmore William Bedell (d. 1642). The actual work of translation had been done by Murtagh King and James Nangle, but the initiative was Bedell’s and arose from a longstanding interest in translation as a tool of conversion.

Before coming to Ireland in 1627, Bedell had been chaplain to the English ambassador in Venice from 1607 to 1610, where he was involved in efforts to persuade the Venetians to break with Rome. He helped to translate the Book of Common Prayer into Italian.

Bedell died of illness in the wake of the Irish Rebellion of 1641. Hopes of publishing the Old Testament as Gaeilge might have died with him, but for another English clergyman who shared his linguistic enthusiasm, the founder of this library, Narcissus Marsh (d.1713). When Marsh heard about Bedell’s manuscript translation of the Old Testament, he arranged with friends, including the scientist Robert Boyle, to have it printed. 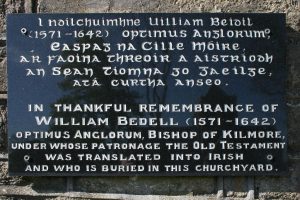 I spent my time as a Maddock Research Fellow searching for traces of how Bedell’s work in Venice might have shaped his approach to language and culture in Ireland. One particularly charming Venetian item amongst the library’s collections is a tiny Hebrew prayer book. It contains the signature of Sir Henry Wotton, the English ambassador to whom Bedell was a chaplain in Venice.

Bedell was a noted Hebraist and he seized the opportunity to purchase rare books in the Jewish ghetto of Venice, including a manuscript Hebrew Bible now held at Emmanuel College, Cambridge (MS I.I.5–7). Interestingly, a note in Bedell’s Irish Bible manuscript in Marsh’s Library records that it and Bedell’s Hebrew Bible owe their survival to Denis Sheridan, an Irish friend of Bedell’s, who ensured they were not destroyed during the Irish rebellion. 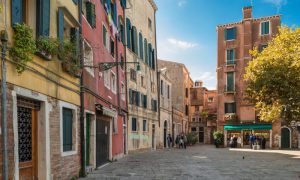 The Jewish ghetto in Venice.

Bedell’s Irish Old Testament was a product of cross-cultural interactions, and drew on his Irish, English, Italian and Hebrew intellectual interests. It bears witness to the lively intellectual world which Archbishop Marsh inhabited, and which fostered the library we know today.