The Habsburg-Bourbon Double Marriage of 1612-15

Dr Bram van Leuveren of the University of St Andrews in Scotland tells us about his recent research in the library as a Maddock Research Fellow. 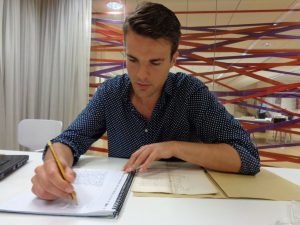 The award of a Maddock Research Fellowship enabled me to travel to Dublin to study the library’s remarkable holdings of French-language pamphlets on the Habsburg-Bourbon double marriage of 1612-1615.

These marriages were concluded between the royal children of the Spanish House of Habsburg and the French House of Bourbon. The two matches enabled a rapprochement between the monarchies after a century-long conflict. They were marked by diplomatic ceremonies and unprecedented theatrical spectacles over a period of three years. 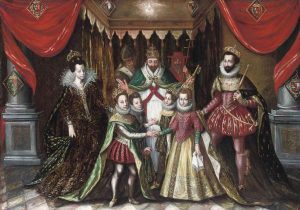 Marsh’s Library’s holdings on the Habsburg-Bourbon marriages are of great historical importance, as they include pamphlets that are unique (with no other known existing copy) or rare (with only one or two other copies extant).

Pamphlets written in support of the double union were often utopian in style. One author filled his text with references to ancient Roman history to suggest that the matches stood in a long and respected tradition of diplomatic celebration. Those who wrote against the marriages were frequently apocalyptic in their assessment of the likely consequences for France of entering an alliance with Habsburg Spain.

The pamphlets were bound in two volumes, probably by a French collector at the time of the marriages. A number of texts were concerned about the ‘threat’ posed to Europe by the Ottoman Turk. These anti-Muslim pamphlets argued that the marital alliances between two of Europe’s great Catholic powers would finally enable Christendom to unite in a crusade against the Ottoman Empire and recover the Holy Land.

My research at Marsh’s Library will appear in a number of peer-reviewed articles and in my forthcoming book. These publications will enrich our understanding of French and European diplomacy in the early-seventeenth century, as well as drawing attention to the library’s unique holdings.

If you’d like to read more about the Double Marriage and European diplomacy, the best works (so far!) are: